20 Tips For NICU Moms (and a miracle)

The day you find out you are going to be a mama should be the happiest, right? At that moment we know our lives will never be the same – for the better! For some, maybe for you, that road isn’t always easy. Learn from my experience as a NICU Momma. Here’s the top 20 things you need to know if you find yourself with a baby in the NICU and the story behind them… 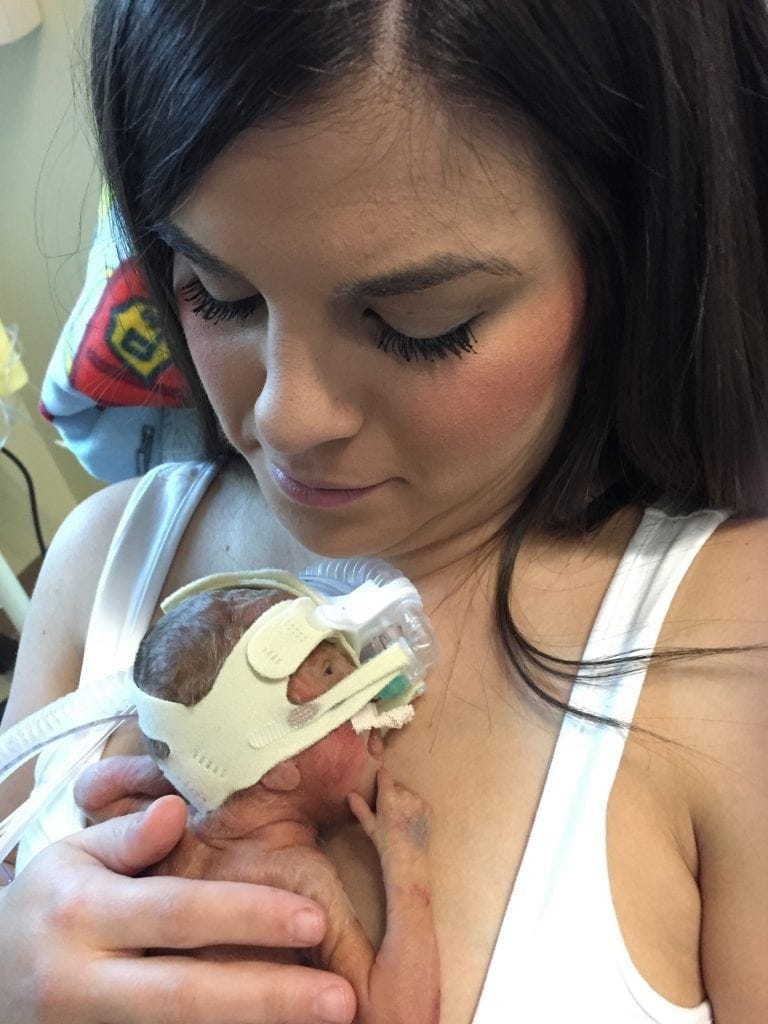 For me, having a baby surely was not an easy road to go down. My husband and I got married, and we wanted to have children fairly soon after, however that was not God’s plan. We were blessed to live in Denver where one of the best infertility doctors has his practice. We went thru countless tests and procedures. Ultimately I was diagnosed with unexplained infertility, PCOS, and Hashimoto’s. Yet, I was still confused, I had all these answers on paper but it was still hard for me to wrap my head around. It was a long two years and it took a lot of time for me to process it all.

At two years we did our first round of IVF. On the first attempt we got pregnant. I still get chills when I playback that phone call when the nurse told me I was pregnant— it was the happiest moment in my life! You might have thought I shouted to everyone from the rooftops that I was pregnant, but I did not. I was so cautious and at times so scared that I would lose the pregnancy, so we told our family and wanted to wait until we were in the safe zone.

For me, pregnancy was beautiful. I loved being pregnant! I had my ups and downs some days but overall it was a special time for me. My OB and high risk OB monitored me closely because of my health and unexplained infertility. Each week things continued to look good. I went to my 22.5 week checkup on a Thursday as I was having my cervix and other things checked and all looked good. I remember leaving and calling my husband and said, “Hey, we are almost to 24 weeks and that is when the baby could survive if for some crazy reason I delivered early,” he laughed and said “that’s great, but we don’t have to worry about that, everything is going to be wonderful.”

Sunday night rolled around and I had a little stomach ache and didn’t think anything of it. I tossed and turned some that night and when I woke up I suspected something might be wrong…

I was up at 6:20AM and the pain from my stomach had gotten much worse. I started to get ready to go to work and I mentioned to my husband that I thought I was having Braxton Hicks contractions – but we both just couldn’t really grasp that… was that really the case? I told him to just go ahead and go to work and I would call the doctor and let him know. So I got in the shower and things intensified— I was heeled over in pain every 5 minutes. Then I started to time it and noticed that it was happening every five minutes. I called the doctor and was waiting for a call back. At that point I knew this was bad and all that felt good was to almost push. My doctor called me soon after and she told me she would meet me at Labor and Delivery. I knew I could get there fastest if I drove myself (my husband was farther away than the hospital), so we stayed on speaker phone and I drove myself to the hospital. 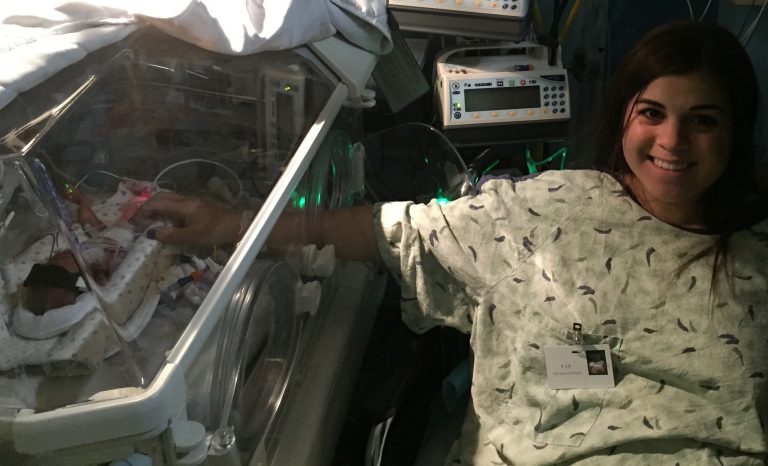 From this point things moved extremely fast. The doctors wheeled upstairs and it all became very chaotic. There was a lot of talking and hooking up to monitors going on. The doctors and nurses asked me lots of questions but shared very little with me. They did an exam and I was 5 cm dilated. I think at that point I got scared but I thought to myself, “Oh, they will just stop all of this,” and they sure did try. I was given lots of medicine and as soon as my husband arrived they let us know I would have to be transferred to be nearest higher NICU unit just in case.

Within minutes I was being put on the Flight for Life helicopter and my husband was again on the road rushing to meet me just as I arrived. Once again they began to run test but it soon became clear… the contractions weren’t going to stop. They were only getting worse.

To make matters worse, Mason was breached and things were getting more serious by the minute. At this point my doctor said that we would have to make a decision on what to do — deliver this baby naturally, and he would die because his head would be crushed, or try an emergency C-section. The C-section might get him out alive but he would most likely die.

The neonatologist came down to speak with us and let us know what we were facing. He had no chance really of survival, and if he did it might not be for very long. If he did in fact survive this, he would never live a normal life. Then he left giving us about 5 minutes to ourselves. Our minds were racing. Fear set in… but we knew we were going to do everything we possibly could for our son. And we did.

I was rushed into an emergency C-section and Mason Henry was born at 2:54pm on Monday September 29, 2014 weighing 1lb 8oz. He was the smallest being I had ever seen. The doctors immediately intubated him and wheeled him off to the NICU. My husband went with him while I had to recover. That was so awful for me – I wanted to be with them— but I couldn’t. 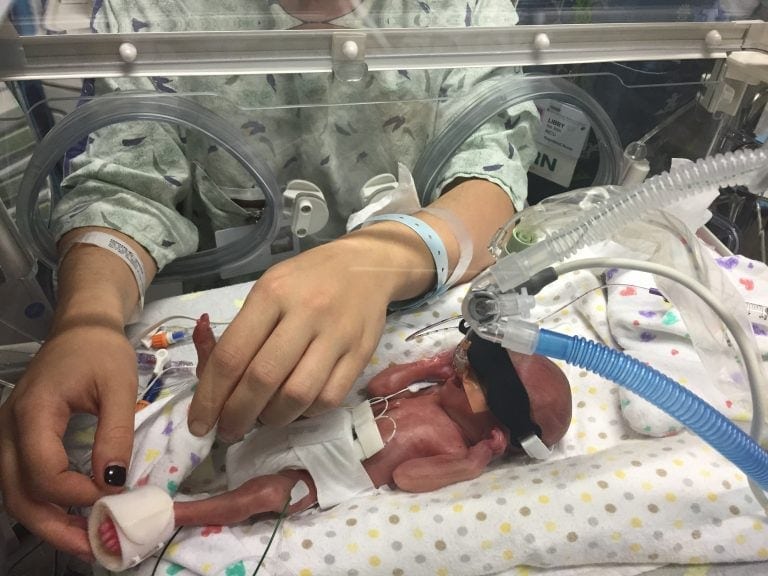 I saw my son for the first “real” time later that evening. He was fragile, hooked up to every machine and cord you can think of. I just wanted to hold him, kiss him, but I couldn’t. I kept whispering to him and touching his tiny finger. They call the first 48 hours the “honeymoon” period. Nothing drastic typically happens, yet all kinds of things are brewing that present itself later. Although, the outlook on Mason was not good and they said he most likely would not survive, he did.

From this point life was turned upside down and on its back— all in an instant. Four days into the journey our son developed a grade 4 brain bleed that was very visible. He was deteriorating. We were told that we should consider turning off the ventilator and just hold him as he passed. Those were words I will never forget. They are ingrained in me. I looked into his being as he would wrap his finger around mine and we knew that it was not up to us, Mason would decide if he was giving up— and he was fighting. He wanted to live. We whole-heartedly believed that, and knew that God had a purpose for him.

I begged the Lord to save my son. Then a few days later after heart surgery and a few other procedures our son’s bowel had perforated and he turned gray from head to toe. We were moved into hospice. It was then that we were told it was the end of the road yet I knew God would forever be faithful and that his love and grace was enough. I again got down on my knees and begged for him to save Mason.

Two days later our son was the only child to leave hospice in that hospital in 32 years.

The road from there did not get easier. Every day in the NICU is a rollercoaster – you have some really good days, then several setbacks, and then the cycle continues. Mason had over 12 different surgeries/procedures in the months that followed. He was resuscitated countless times, and came very close to death more times than I can even count. He would face something, they would say they had never seen survival or anything like it, and then after a lot of care, prayers, and hope, he would bounce back. It was not always pretty – in fact most times it was scary, messy, and chaotic – but there was still beauty in all of it. 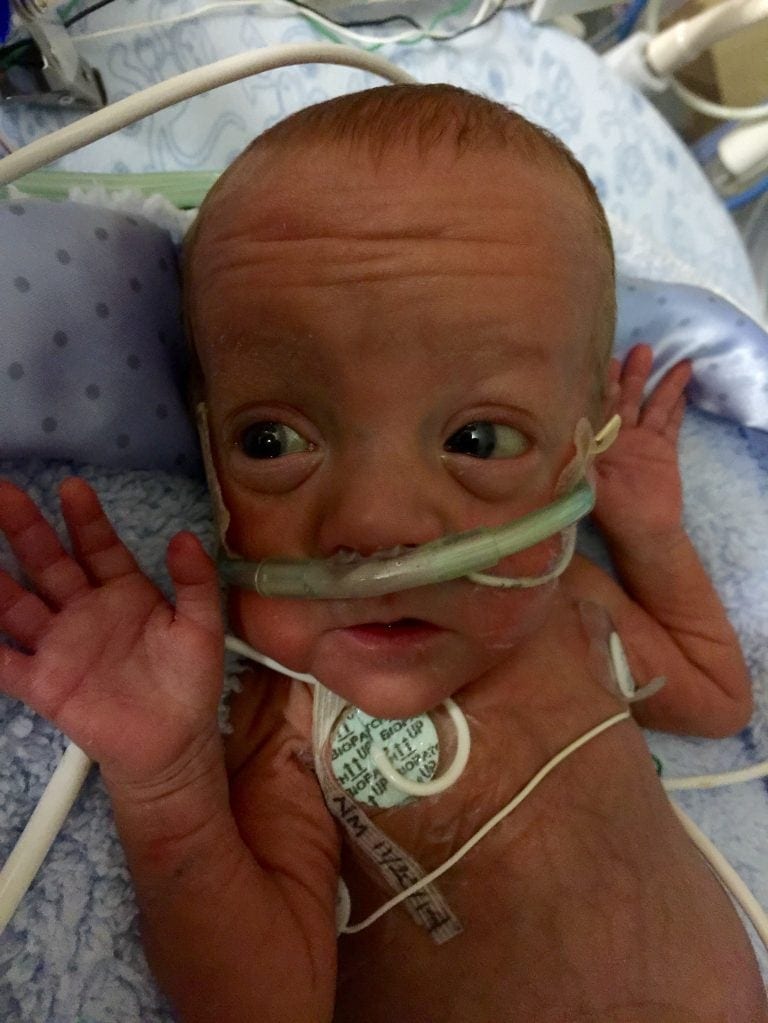 We spent five months in the NICU. I found myself at a point early on in the NICU where I had a choice to either stay strong, positive, and grateful for my son and my family or not. I knew that I needed to choose joy and live my life on God’s strength not mine. I knew that the way the three of us would survive this was to choose the little by little progress in each day, as some days were life and death within those five months and even after coming home.

We saw that as we kept happiness, joy, and positivity in Masons NICU room— from us as his parents, to his gracious nurses, and incredible doctors— he fed off of this strength. 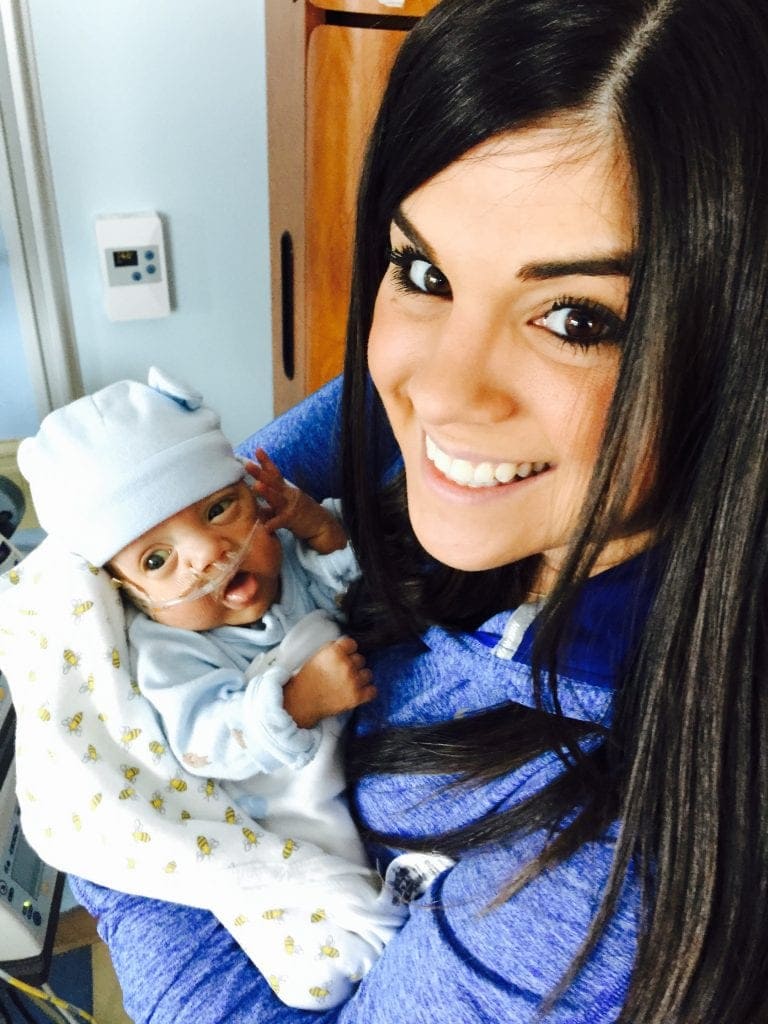 The miracle of my son has shown me that we are on this earth for a reason and with a purpose.

We saw His promise. Fast forward to today and he is a healthy, joyful, little two year old. He has a little catching up to do physically but he is doing so well. Since being home he has had other surgeries, but he has always remained tough as nails — in fact, that was his nickname. He is our miracle.

I am forever grateful for this entire process. I would never change a thing. Although there were some very hard and scary times that no parent should see, I witnessed God. I have felt Him and seen His unconditional love. The Lord has changed me in so many ways, I am not perfect, but He made me His daughter, a grateful wife, and a mama to my miracle Mason.

I want to encourage you – If you are going through something like this in your life… You are a strong mama. Your baby is a beautiful gift. Know that you have the strength to go through this. Hope is always there, I promise.

Have a NICU story? We’d love to hear it! Leave a comment below or leave a link to your story to share! Each story is beautiful and unique.